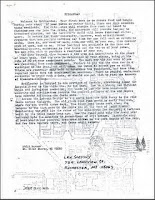 Today marks yet another great day in OSR research: ... over at Risus Monkey posted the PDF scans of the Ryth Chronicle, an 80 page document stemming from the very early days of our hobby, written on a typewriter around 1975-1977 in order to introduce new players into the campaign.
The original authors - John Van De Graaf and Len Scensny - had exactly the experience I am trying to simulate with 'The Fantasy Game': They stumbled upon the original rules, were absolutely fascinated, couldn't make sense of many things, telephoned with Gary Gygax to get things explained and made up their customized version of the game. The PDF documents mirrors the results and I have immediately added it to the reference section of 'The Fantasy Game' as it probably will provide some great insights into the way D&D was played in the early days.

What I found even more interesting is that the Ryth Chronicle actually has a much more intense history than one might expect from the Risus Monkey post: This post in the Sandbox of Doom also mentions it and I quote:


[...] a side-effect of digging out the old Traveller stuff was finding a bunch of old fanzines, including a fairly complete run of Ryth Chronicle, edited by John Van De Graaf (John, you out there?). Ryth Chronicle got a mention in an early Strategic Review, so it is notable for being one of the earlier non-APA RPG gaming 'zines. One of the more interesting finds in Ryth Chronicle was a chart showing characters in the campaign, both dead and alive, along with XP, number of sessions, etc. [...]