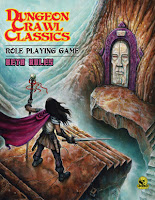 Now that everyone is talking about the beta release of the Dungeon Crawl Classics RPG from Goodman Games I felt the need to chime in, too, as I love to look at their upcoming product from a designers and a players point of view. I will try to comment it after a casual glance. My viewpoint will be very strongly 'The Fantasy Game' based as DCC RPG seems to take a similar philosophical viewpoint for its design but a very different technical design route (quote from their website: "Return to the glory days of fantasy with the Dungeon Crawl Classics Role Playing Game. Adventure as 1974 intended you to, with modern rules grounded in the origins of sword & sorcery.").
First impressions first:
So much for first impressions. I have not yet played the game and most probably won't play it in the near future. My stomach tells me I still prefer the HackMaster approach if looking for old school feel with more complex rules but as HackMaster 5th edition is only out as a basic version I will have to wait with a final judgement.

At least Goodman Games need to be recommended for trying a very different approach to old school gaming and I wish them all the best. My stomach tells me that the final result will not be my cup of tea but I will buy the final game in any case if just for all the great artwork.
Posted by The Creator at 3:56 AM