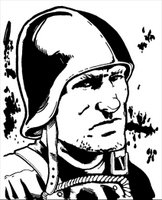 Today I only did minor work on 'The Fantasy Game' (it's once more Gaia Gamma time ;-) ). First of all I adjusted the blog design a little bit: The blog description at the top is gone and has been moved into a text box to the right (in order to allow for a more compelling status update structure on Facebook).

Secondly and more importantly I have done some minor work on 'The Fantasy Game', too, despite this being a Gaia Gamma day.
Specifically I have toyed with the Charisma adjustments for hirelings. The original rules are pretty tough in this (and IMHO neither make much sense nor are much fun - a good reason to alter them and provide a sidebar comment explaining the change).

I find this disturbing in two ways:
Thus 'The Fantasy Game' will use slightly modified numbers:
The progression is much nicer and coupled with the much better loyality bonusses of higher charisma scores, the 18 score still is very powerful, but no longer so one-sided.