About languages (Reading OD&D from cover to cover) 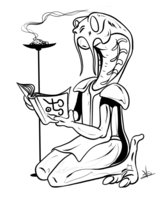 One thing that bewilders me while reading the little brown books is the comparative detail given to languages - at least when comparing the language section to other parts of the rules.

The section on languages is not really long, a mere 13 lines, but that's a lot more than how to change classes, what alignment means, how spellbooks work (or spell slots at all), how characters advance, etc. combined. I'm not sure whether it is a hint at how far ranging campaigns already were in those days (why would you care for a continental common tongue if your characters were constrained to a single dungeon?). I am fascinated once more by this aspect since it seems to fit rather well to later rules in the LBB like sea travel, etc. It also hints at the amount of creativity in those early days... no waiting for special rulebooks for sea travel or space trips there ;-)

Given the fact that characters can gain followers by subduing monsters or hiring unusual character types, it makes a lot of sense to have other tongues, but this common tongue thing really makes me wonder how far and wide characters commonly travelled in the early days.

From what little I know about the ancient Blackmoor and Greyhawk campaigns there seem to have been vast differences, Blackmoor mostly being restrained to the vicinities of the holdings of the same name while Greyhawk early on seems to have included wild trips to exotic locations (a story of Robilar being teleported to the other side of the planet and having to return comes to mind).

So in summary I again love how a tiny rule opens up the imagination for a whole range of adventures vastly surpassing the rather limited scenery of a single dungeon - even though it might have been a mega dungeon.

BTW, the LBB additionally provide rules for alignment languages for the three given alignments and grant knowledge of one additional language per point of intelligence above 10 (interestingly using the term "one language for every point above 10 intelligence factors"). Does anybody have any idea where this factor term comes from? Is it something being used in wargaming circles or just a stray term?
Posted by The Creator at 1:34 AM