Today we are going to read through the introductory explanations of the white box edition of Men & Magic before starting out with the actual game rules.
The introductory text is excellent. It stresses all the important points of quality RPG systems:
I find it very interesting that the second illustration in the game (after the one on the cover) actually shows three wizard types, gurus or whatever you call them sitting in a circle and working some kind of magic. The illustration is rather funny and simple and yet it still manages to capture the excitement of this new type of game as it foreshadows the immense variety of options available in the game.

The next section explains the scope of the game. While this section is very short (two words over ten lines) it is fascinating to read. Actually it implies that all kinds of campaign types (fantasy, SF, prehistoric) can and should be played (with growing experience). Miniatures are considered once more - as aesthetic enhancements of the game but no necessity at all. The age level for the game is listed as 12+ (with coincides with my starting age when I got the red box version of D&D) and which worked very well for me.

What again surprised me is the large number of players expected for campaigns - everything from 4 to 50 seems suitable. Naturally this does not mean "players in one session" but it shows the enormous appeal provided by the new RPG genre as finally there was a channel for the imagination of so many people. Glorious. Also interesting is that the text recommends about one referee per 20 players, which again stresses the cooperative nature of campaigns with people working together to tell a much bigger story.

As for the recommended equipment section I am somewhat torn. Possessing the rules themselves is a most appropriate requirement (given the fact that many of the early gaming groups started by xeroxing the one rules version someone had managed to acquire - as retold in many tales of Gary Gygax or Ken St. Andre). But Outdoor Survival, the Avalon Hill game, also is listed as a requirement. Since I never owned that I immediately went to eBay in order to win a version in an auction.

For 'The Fantasy Game' I am looking forward to creating a new map inspired by the one in Outdoor Survival and by maybe mining Outdoor Survival for some interesting rules. As for creating maps this is the point where I usually recommend the most excellent Hexographer software by Inkwell Ideas. A great mapping package that does exactly what you expect from it for your old school needs! Or in other words: TFG will not require any such game as this greatly inhibits the proliferation of the system.

The next requirements are dice of all kinds... from four sided to twenty sided. Here I am really in doubt whether I should require these dice, too, for TFG, allow their use as an optional rule or just restrain myself to using six-sided dice in the game. In my other OSR design, Gaia Gamma, I definitely opted for going with just six sided dice although the mechanisms used in Gaia Gamma are just too different from standard OSR fare - thus they are no option here. I will discuss this in a future post and try to weigh all implications. For now I tend towards only using six sided dice as I understand Ken St. Andres criticism in those early days very well that other dice on one hand were very hard to procure and on the other hand pretty expensive if you could find them at all - both important factors considering that many of the early gamers where students, etc. 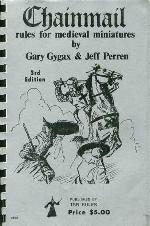 Next Chainmail is added to the list of required equipment. With TFG I definitely am going to separate the game rules from their wargaming roots. Thus everything provided by Chainmail (how much or little that might be) will be included in the core rules. With one or more of the dice options mentioned above.

This leaves one interesting challenge though as Chainmail also provides a mass combat system to the rules, something that would not show up again until the Master Set of the D&D rules. I always loved the rules included therein but I am no fan of really having to play a complex tabletop wargame in order to resolve some small units battles. We will have to see about this aspect of the game. So tell me: How many of you actually used Chainmail in those golden days for more than man to man combat?

Two of the items I particularly liked in the closing list of required items: Imagination and a patient referee. Extremely important. But they forgot the munchies - something to be corrected in TFG ;-)

The final text in the introductory section of colume I is titled Preparation for the Campaign. It finally spearates the referee role from the player role. The referee needs to draw up at least half a dozen of underground maps for his campaign, populate them with both horrible monsters and treasures and note everything down on keyed documents, so that he will be able to send his players into unknown depths. Details on this are postponed until volume III of the rules. Each player needs to slip into one of the available roles each in order to be able to play. The text mentions that players will work upwards as they gather experience and then proceeds to explain the roles... finally the first actual rules sections which we will examine in more detail in the next posting.
Posted by The Creator at 9:54 PM