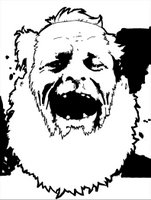 Abilities in OD&D in some respect are well acquainted: strength, intelligence, wisdom, dexterity, constitution and charisma have become landmarks in the way many roleplaying games define characters. At the dawn of time things were slightly different...
As mentioned in a previous post what we call today attributes was named abilities at the beginning of our hobby signifying a much broader way of defining a character.

Thus it might be somewhat surprising that the rules for using abilities are extremely... well... almost non-existant in OD&D.

First of all the six abilities (sometimes called categories which implies an even broader and stronger connection to classes and their general use) are divided between those that are prime requisites and the rest.

The first three attributes are prime requisites for specific classes and have no function at all except for providing characters of the given class with an experience point bonus or penalty. Fighting-men use strength as their prime requisite, magic-users intelligence and clerics wisdom. The bonus is +10% for scores of 15+, +5% for 13-14, -10% for 7-8 and -20% for 6 or less. The text implies some other benefits (e.g. strength will also aid in opening traps and so on) but stating that the rules are sketched at best in this regard still would be flattering.

The other abilities provide a modicum of modifiers - constitution affects hit points (+1 for 15+ per die, -1 for 6 or less per die), dexterity affects missile hit bonuses and charisma determines moral, loyality and the number of special followers. Some parts again are extremely sketchy, e.g. a constitution score of 13 to 14 means that the character will withstand adversity. Whatever that means. And for whatever reason this might not apply to constitution scores of 15+.


All in all the ability scores are surprisingly laid back in the original rules and much less significant than in later editions. Skills so far are not even mentioned. Which gives a total different feel to "roll 3d6 in order" (and variants thereof) as it is not that much a problem of having just about average abilities. In that regard I feel that later editions of the game were badly "scaled upwards" as the designers continuously increased the importance of attributes with very little thought about how to raise them (AD&D 1st edition probably being the prime culprit here). But for 'The Fantasy Game' I like all this. Back to the rules...
How to use abilities in the game itself is not explained at all (at least not in the abilities section). For 'The Fantasy Game' I want to have definite rules on this. So here we go with some simple definitions:
Finally OD&D has some comments about applying non-prime requisites to determine the experience bonus a character receives. As this section is pretty confusing and in many discussions (IMHO) again governed by preconceptions I will discuss it explicitly in one of the next posts.

(BTW: The image to the top right is licensed under the Creative Commons Attribution 3.0 Unported License, copyright by Jeff Preston.)
Posted by The Creator at 9:20 PM

Email ThisBlogThis!Share to TwitterShare to FacebookShare to Pinterest
Labels: abilities, from cover to cover, the fantasy game