Reading OD&D from cover to cover: Rolling attributes (part I) starting with an amazing revelation 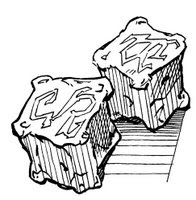 Prior to the character selection by players it is necessary for the referee to roll the six-sided dice in order to rate each as to various abilities, and thus aid them in selecting a role.

I mean... did anyone of you ever use that roll? Did the referee roll the attributes for your character? I mean, except for pregenerated characters for cons and tournament play?

I never saw this rule before and I surely never used it in any of my games as I always viewed the process of rolling your characters attributes as one of the sacred rituals solely in the domain of the player. Not doing so myself as a player somehow would have spoiled my character, loosened my attachment and not really have made him mine. I probably feel so strongly about this as the whims of fate (rolling the dice) always have been one of the most exciting aspects of roleplaying games to me, as you never can know what to expect. Not doing so myself for the absolutely central task of generating my character somehow feels wrong to me on every level.

Don't misunderstand me. I don't mind doing this in the face of the referee but being relieved of this decisive part of the birthing act? Unimaginable.

So the attributes section in OD&D already started nicely with some new insights on the aspect of ancient role-playing. Since I feel so strongly about character generation 'The Fantasy Game' will only provide this as an optional rule and assume that the player rolls the attributes for his character in the presence of the referee.

How do you feel about this? Am I alone in this rather strict opinion on how a character should be birthed? Or do you find nothing wrong with using pregenerated stats provided by someone else?
Posted by The Creator at 10:37 PM